Slow Cooker Rice Pudding in a classic and inexpensive comfort food dessert. Also called "Arroz Con Leche" this recipe is made with whole milk instead of cream. Sprinkled heavy or light with cinnamon sugar this pudding is great served warm or chilled.

This is a great recipe to make on a lazy day at home.

All the details are also included in the recipe card at the bottom of this post.

Rice pudding is great warm or chilled. When chilled the pudding will thicken a bit. Fresh fruit or berries are also wonderful topped over the pudding.

A small Emile Henry Baking Dish is just perfect for the amount of pudding this makes.

How to store leftover pudding

The pudding can be stored in a covered container in the refrigerator for up to 2 days. 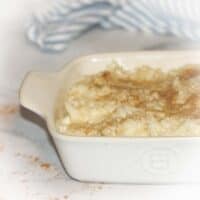 The pudding will thicken as it cools. Add a little more milk if you want a thinner pudding.

More Recipes For One

Thanks for coming! Let me know what you think or share a tip. Cancel reply

Cooking scrumptious small batch recipes for one and two are created in my small 1960’s kitchen. Adapting my favorite recipes for the slow cooker and toaster oven cooking. I learned to cook Shepherds Pie in England and Classic Marinara while living in Italy. Born in Southern California and raised in the Midwest, my cooking represents the best of both regions with an added touch of Southern hospitality.

Looking for stew recipes? This is the place for all-season recipes! Stews aren't just a cold-weather dish. Check out my new blog!

The Crumb - Bake From Scratch